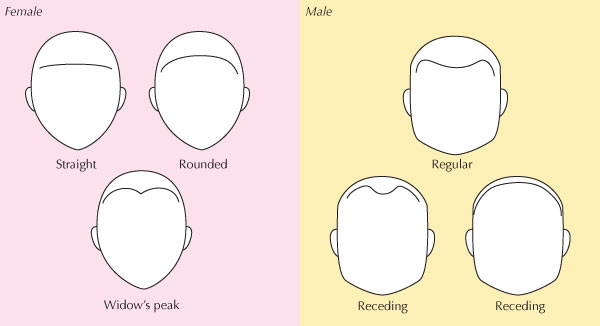 If your hairline looks different from others’, you may be wondering if yours is normal or if you’re dealing with unnatural recession or hair loss. The fact is, there are so many different types of hairlines out there for both men and women that it can be hard to keep track of them all. Here’s a brief overview of some of the most common hairlines.

7 TYPES OF HAIRLINES YOU SHOULD KNOW ABOUT

A high hairline is very common for both men and women. People with this type of hairline look like they have broad foreheads because their hairlines look like they are higher than average on the head. A high hair line can be genetic. It can also be the result of patterned hair loss.

It’s important to note that it’s natural for hairlines to get higher with age. Throughout adolescence, it’s normal to have a juvenile hairline. This type of hairline is low and makes the forehead appear smaller. With age, it’s normal for the hairline to “mature” and become a little higher and less rounded.

If you think the problem is recession, there are things you can do to slow it or possibly stop it. Revita shampoo is a great product to help with hair loss. It’s a hair-stimulating shampoo that can fight follicular dysfunction in both men and women.

Like the name suggests, a low hairline is one that sits low on the forehead. If the forehead appears to be smaller than normal, then the hairline is most likely low. It often appears unusually close to the eyebrows. People with a low hairline generally don’t worry about hair loss unless their hairline starts to recede and become higher with age.

A middle hairline is considered standard, and it is arguably the most preferred type. If you have this type of hairline, you have a standard gap between your forehead and your brows. Your forehead doesn’t look too broad, nor does it look too small. Many people with hair recession use hair loss products such as Spectral.DNC-N to achieve a hairline that’s closer to a middle hairline than a high one.

Although it’s called “Widow’s Peak,” the V-shaped hairline is found in both men and women. It leads to a heart-shaped face and can cause the appearance of recession on either side of the “V.” Typically, the pointed portion of the hairline is located in the center of the forehead, although it can be slightly off-center as well.

Although this type of hairline is normal, if you notice increasing loss of hair on either side of the peak, you’re probably experiencing recession. Some people don’t start out with a widow’s peak hairline, but develop one as hair loss begins at the temples and extends backwards.

Revita Tablets for Hair Growth Support may help combat this common issue. The tablets contain Zinc and other hair-maintenance ingredients in a proprietary formula. Alfalfa extract, apple extract, ferrous gluconate and other ingredients known to help stimulate hair and follicle health are also included in the formula.

If your hairline doesn’t have any symmetry, it can be referred to as an uneven hairline. Both men and women can have it. Often, one side of the head has more hair than the other side. There may also be a zigzag-type pattern of hair growth. In some cases, the hairline may appear to take a letter “W” shape.

DS Laboratories Spectral.F7 hair loss products can be a good solution for both males and females who are suffering from uneven hairlines due to recession. They contain a variety of ingredients that help slow thinning hair, including:

Studies have shown these ingredients to have positive effects on hair recession.

Cowlicks are fairly common and can make hair styling a challenge. They are small portions of hair that grow in a different direction from the hair around them. As a result, they can make it look like the hair is unkept or messy. Fortunately, there are certain hairstyles that can make cowlicks less noticeable. In men, cutting the hair short to the head can minimize their appearance. In women, parting the hair in a certain direction or pulling it back in specific hairstyles can make cowlicks all but invisible.

A receding hairline can encompass many of the above hairlines, including widow’s peak, high hairline and uneven hairline. Hair recession most commonly affects males and usually begins after 25 years of age. However, it can affect females as well. In particular, women with a family history of hair loss are more likely than other women to experience recession as they age.

In addition to genetic predispositions and hormone imbalances, hair loss can also be caused by the following:

Destruction of the hair follicles due to an autoimmune disorder called alopecia areata can also cause hair loss in localized areas.

If you’re noticing signs of recession in your hairline, don’t be too discouraged. There are things you can do to fight hair loss and improve the health of your hair and follicles. In addition to practicing good hair hygiene and eating a balanced diet, you can also use products specifically designed to combat hair thinning and loss. At DS Laboratories, we offer a variety of hair loss products, including tablets, shampoos and conditioners, and other topical products. Browse our selection today to find science-backed products that will help you achieve the hairline you want.

Sold out
Sold out

Sold out
Your Cart